Skip to content
A new project shines a light on a hidden history, offering an alternative view of the British countryside, writes Rahul Verma.
T

It’s an image that endures across the ‘green and pleasant land’ under threat from ‘satanic mills’ in William Blake’s Jerusalem, in the novels of Jane Austen and Evelyn Waugh, in the watercolours of John Constable and JMW Turner, and period dramas, such as the Oscar-winning Gosford Park and wildly popular TV series, Downton Abbey.

More like this:
– Rediscovering India’s forgotten masterpieces
– Why are statues so powerful?
– The iconic civil rights images that still resonate

In 1993, then Prime Minister John Major, in a speech making the case for Britain being at the heart of Europe, famously said, “Fifty years from now Britain will still be the country of long shadows on county [cricket] grounds, warm beer, invincible green suburbs, dog lovers and pools fillers and – as George Orwell said – ‘old maids bicycling to Holy Communion through the morning mist’.”

However, Colonial Countryside, a youth-led history and creative writing project between 60 primary schools and the National Trust – the heritage charity and 5.6 million-strong membership organisation responsible for 500 historic places in England, Wales and Northern Ireland – is unsettling the idea of the rural utopia. The scheme aims to bring out neglected histories that highlight the connection between country houses and the wider world, for example West Africa, the Caribbean, India and China, through the British Empire and colonialism. 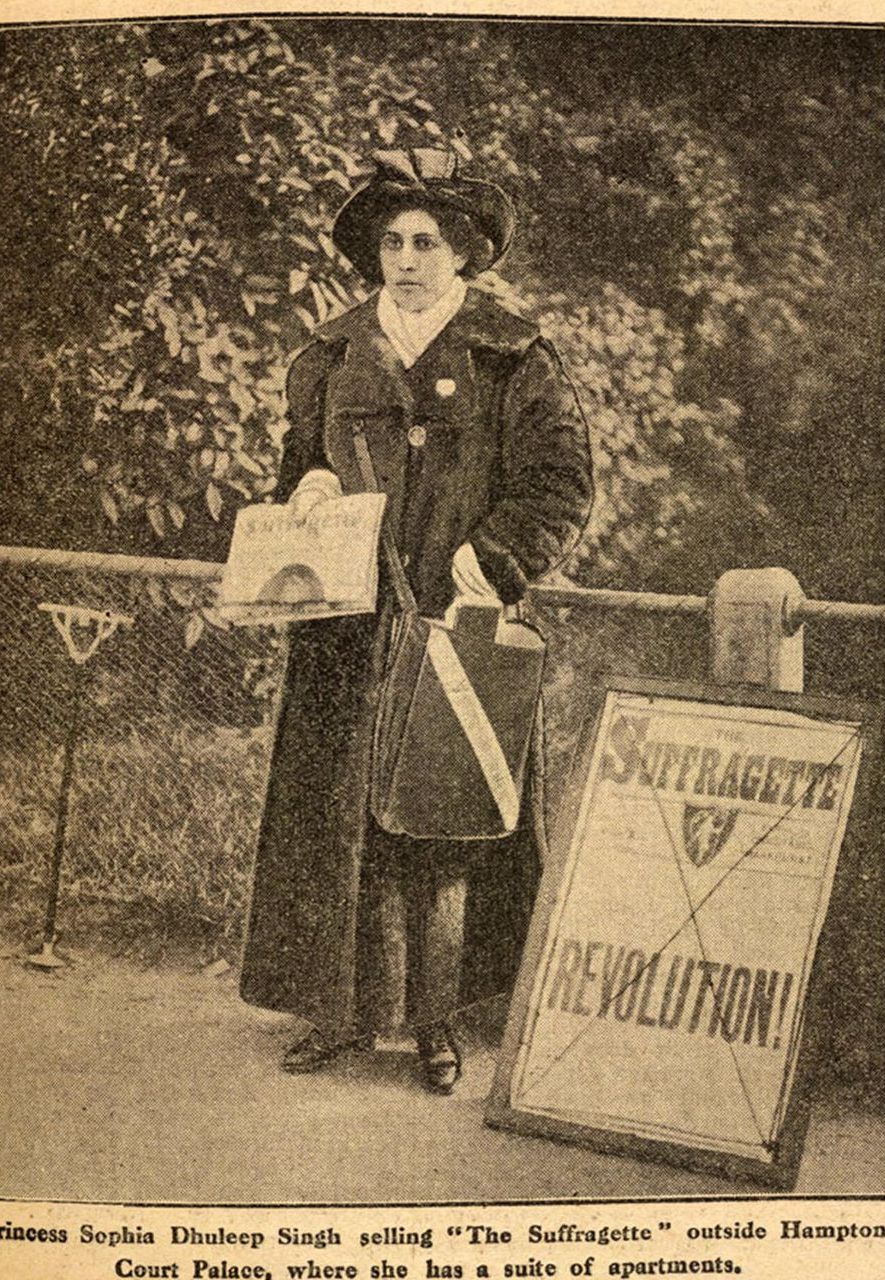 While many of us visit National Trust sites for fresh air, a stroll, cream teas and a nosey around magnificent country piles and their gardens, over the past two years Colonial Countryside has brought primary school children to explore Dyrham Park near Bath, where 17th-Century sculptures of African men kneeling in chains highlight links to the slave trade, and Kedleston Hall in Derbyshire, where a tigerskin rug tells the story of trophy hunting during Britain’s colonisation of India.

Wightwick Manor, near Wolverhampton, reveals high-society tales of Queen Victoria’s god-daughter, the celebrity Indian princess and campaigner for women’s suffrage Sophia Duleep Singh, while Sutton House in Hackney was the home of Captain John Milward, a ‘merchant adventurer’ with shares in the East India Company, who made his fortune from the silk trade; in fact historians highlight that from the late 17th Century to the early 20th Century, one sixth of Britain’s country houses were purchased by merchants whose fortunes depended on colonial trade.

Dr Corinne Fowler, associate professor of postcolonial literature at Leicester University, established the Colonial Countryside project because country houses and gardens rarely seem to explain or contextualise their links to Empire. “I wanted Colonial Countryside to partner with the National Trust because country houses were so important to the operation of empire in so many ways, and to help the National Trust to tell those stories to visitors,” she says. 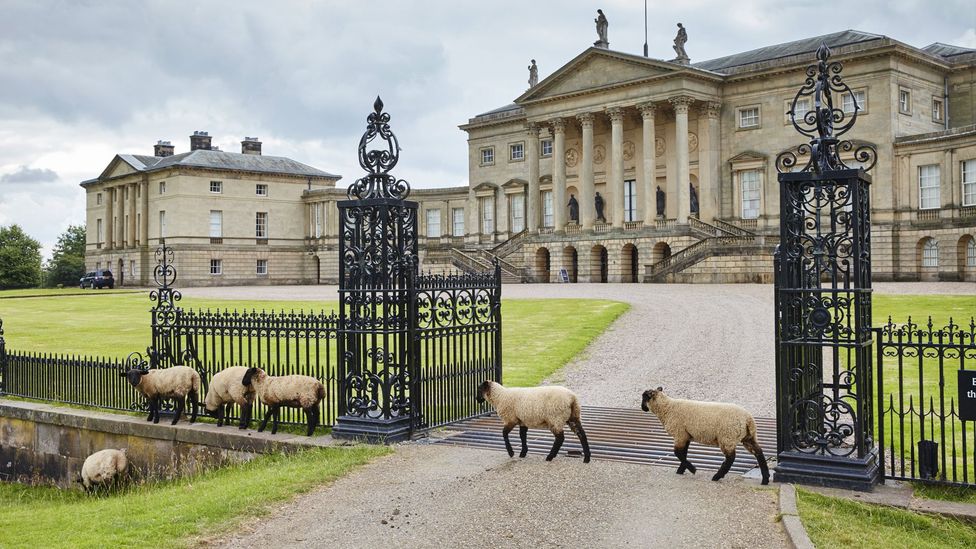 “I put together the idea of a child-led history and creative-writing project to explore those histories, whether connected to the British Atlantic world or East India Company, and to think about how we can tell these stories and make them clear to visitors when they’re central to the history of the houses,” continues Dr Fowler.

The project, which includes a creative writing element with Peepal Tree Press, has seen children co-curate exhibitions highlighting colonial histories at four National Trust sites (Kedleston Hall, Basildon Park, Penrhyn Castle and Sutton House), take visitors on guided tours (pre-pandemic), and contribute to visitor guidebooks. The exhibition at Kedleston Hall saw children write about six objects, including a peacock dress worn by Lady Curzon (married to the Viceroy of India, Lord Curzon), an ivory carving of an elephant and a silver Afghan table. At Charlecote Park in Warwickshire, children wrote about an enslaved boy who appears on the edges of a painting in the 16th-Century country house, in National Trust visitor guide books – “When we were looking at the painting you could see children thinking, ‘if I’d been living at that time, that could have been me’,” says Dr Fowler.

Colonial Countryside has caught the imagination of children in ways that Dr Fowler never expected. “A group visited Dyrham Park and came across stands depicting African men in chains – they had an important discussion about whether they should be on display. Some felt yes because it shows the house’s connection to the slave trade and the Royal African Company, while other children felt it was offensive,” she explains. 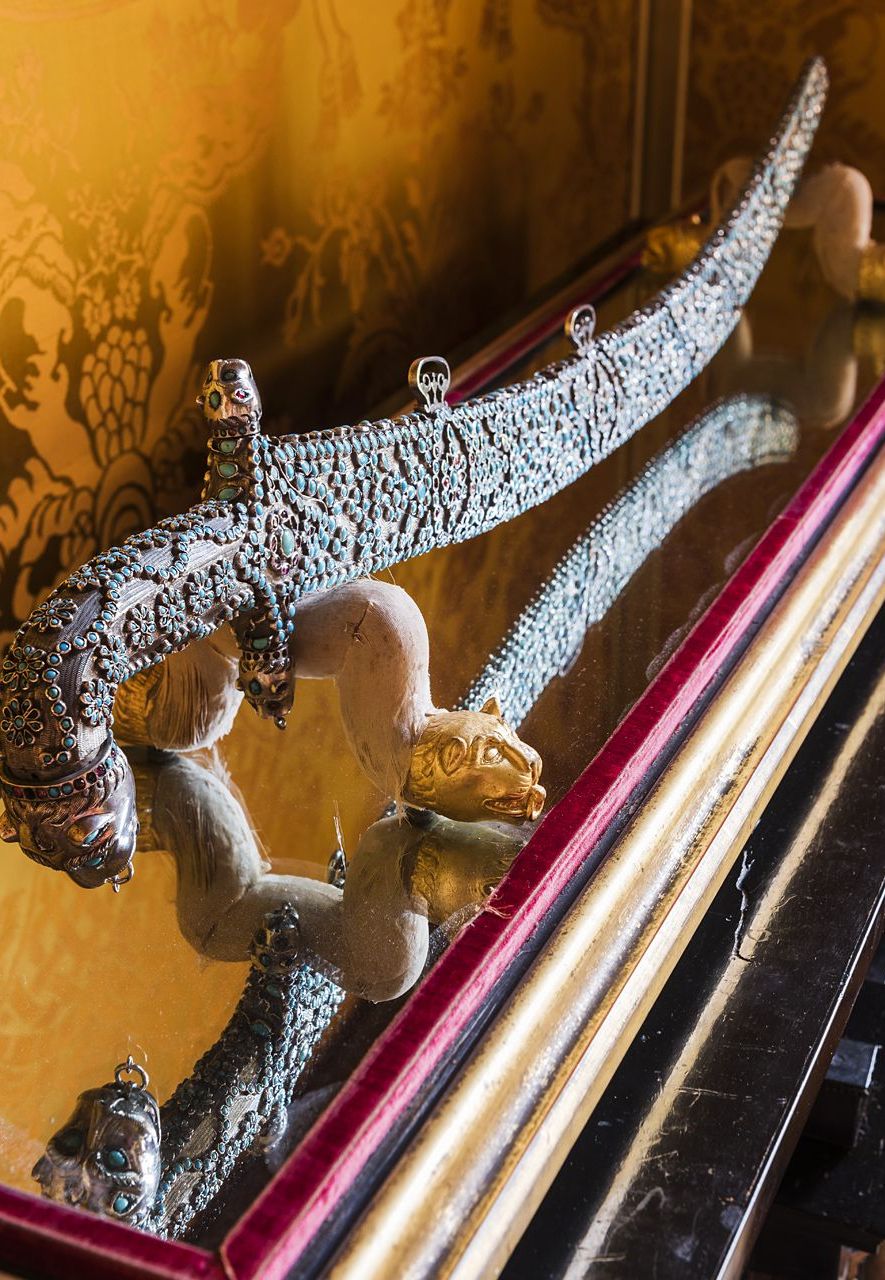 When a group of children saw this 18th-Century Indian dress sword at Charlecote, they argued the label should be changed (Credit: National Trust Images/Andreas von Einsiedel)

“For some children, the histories resonate with their family history and who they are – for example XazQ and her family have Indian backgrounds and on a visit to Charlecote Park, XazQ saw an Indian sword. It said the sword had been ‘taken during the Indian mutiny’, and XazQ felt it should say, the sword was ‘stolen during the First War of Indian Independence’ – there was a great discussion about the wording,” explains Fowler.

Following the group’s representations, the label was changed, as XazQ explains: “The dress sword was incorrectly identified – it said it was from the ‘Indian mutiny’ but I told them it should be the ‘First War of Indian Independence’, so they changed the label. The whole group settled on ‘captured’, not ‘taken’.”

Inspired by the Colonial Countryside visit to Charlecote Park, where XazQ saw a painting of 18th-Century Indian ruler Tipu Sultan, on a trip to India she and her family went to Tipu Sultan’s Summer Palace and Museum in Mysore. There, XazQ was fascinated by the very different accounts of historical events compared with how they’re talked about in Britain, and the National Museum in Delhi is interested in partnering with the National Trust.

Clearly XazQ is captivated by India’s and Britain’s shared history and she’s curious why history of the British Empire is not more widespread and covered more thoroughly in schools. “Apart from the Colonial Countryside project, I’ve not studied anything about India and the British Empire – I find that people are very reclusive talking about the British Empire,” says the 12-year-old. 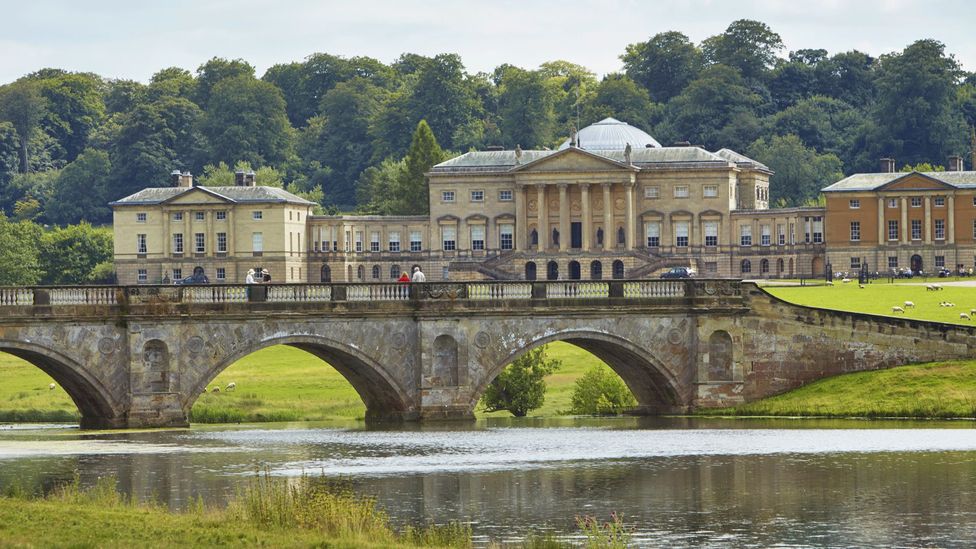 Following the toppling of the statue of slave trader Edward Colston in Bristol during Black Lives Matter protests in June, the issue of Britain confronting its colonial history is a hot topic. There’s a growing clamour to reform the national curriculum to make teaching Britain’s Imperial history, such as its crucial role in the slave trade – not just its abolition – mandatory in secondary schools; there is also a sense that understanding how the concept of ‘race’ and race hierarchies underpinned Empire, would help combat racism in Britain.

Dr Fowler welcomes the discussions that the removal of Colston’s statue has triggered – they’re the kind of honest, open and sometimes difficult conversations that Colonial Countryside is stimulating: “It is vital we have this conversation now – we’re very familiar with the history of the Tudors and the World Wars, but there is a gap in our collective knowledge of 400 years of colonial history and its role in shaping modern Britain.”

“Because of this gap, our conversations seem impoverished – by looking at the history we can put this jigsaw puzzle together and get a more complete picture of how Britain fits into the world, which we’ve been missing for so long. People say Colonial Countryside is about rewriting history, but it’s encouraging broader, evidence-based conversations about our past. We shouldn’t confuse national pride with history, which is always warts and all – history is full of violence and injustice, that’s nothing new,” says Fowler, who will explore these themes in her forthcoming book Green Unpleasant Land: Creative Responses to Rural England’s Colonial Histories (Peepal Tree Press). 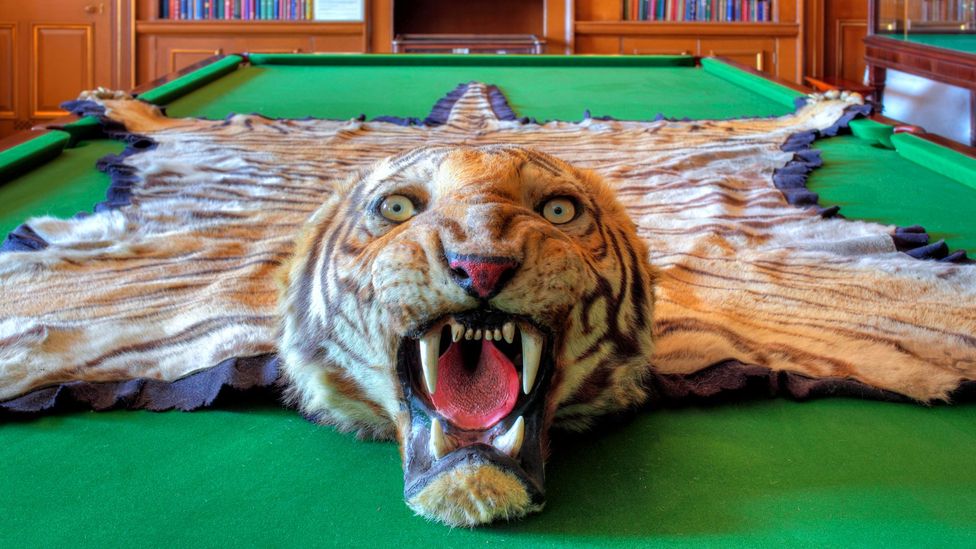 A tiger rug at the Curzon home, Kedleston Hall; while Viceroy of India, Lord Curzon decided to partition Bengal in 1905 (Credit: Alamy)

Raj Pal, a historian with extensive experience in the heritage sector – who works with Colonial Countryside and the National Trust in bringing the colonial histories of country houses to life – feels that facing up to the good, bad and ugly histories of the British Empire is long overdue. “In a crucial way, Colonial Countryside is filling a gap of the history which we have deliberately not been taught,” he says.

Our sense of nation today is very different to 25 years ago and people, especially young people, have to be represented – Raj Pal

“We have a myth of ‘Britannia rules the waves’ and making Britain ‘Great’, but we don’t want to address the fact that Britannia ruling the waves is to do with the slave trade, colonialism, Empire and massacre, as well as trade in tobacco, sugar and salt,” he continues.

He believes that now more than ever, Britain’s story of self and who makes the nation needs broadening. “Our sense of nation today is very different to 25 years ago and people, especially young people, have to be represented in the heritage sector – museums, galleries and National Trust properties – because they’re repositories. If younger generations don’t see their heritages represented in these spaces, they’re not going to go,” he says.

As the bringing down of Colston’s statue shows, ignorance of Britain’s past is far from bliss, and as XazQ so eloquently puts it, harms our future. “Colonial Countryside has made me realise that our present is based on our past, and our present will shape our future. The British Empire has made Great Britain the way it is today – if we carry on not talking about it, we would be taking history for granted and future generations won’t know about it, and that makes our future bleaker,” she says.

And if you liked this story, sign up for the weekly bbc.com features newsletter, called The Essential List. A handpicked selection of stories from BBC Future, Culture, Worklife and Travel, delivered to your inbox every Friday.